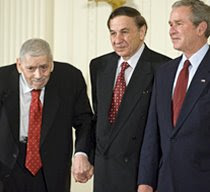 Their music "has helped bring joy to millions"
The Brothers Sherman, Richard (L) and Robert (R), who wrote so many of the great Disney songs (as well as Disney-like songs for the Disney-like film Chitty Chitty Bang Bang) received the highest honor an artist can receive from the US government.

The Shermans received the National Medal of Arts Lifetime Honor on November 17, 2008 at the White House.

The official statement is at this link and it has a nice biography of the brothers.

They wrote the Small World theme, Tiki Room song and the Mary Poppins songs, including Chim Chim Cheroo, for which they won an Oscar.

The Stay Awake song that Julie Andrews sang to the children is a wonderful lullaby. And Feed the Birds is such a great song, Walt Disney used to call them in on late Friday afternoons to play it.

They wrote the carousel of Progress song and a huge host of others. I looked for an actual listing of all their songs, but did not find it. There were lists of movies or plays they scored and those lists themselves were quite long.

Congratulations and more so, thanks, are in order for these two still active brothers. Their music very literally has helped bring joy to millions of people and they deserve the recognition for this.

From the Press Release:

Though her words
are simple and few
listen, listen, they're calling
to you
Posted by rehallag at 5:35 PM

Nice you are back, The Sherman Brothers for sure deserved it. The musics they did for Mary Poppins sound so naturally inspired, in line with one another and with the movie, that they seem to have sprang naturally from a never- ending source of creativity.

Thanks Duvivier. Not so sure how back I will be, but I hope to post some things.

The Sherman Brothers were/are truly amazing and were such a perfect fit for Walt Disney.